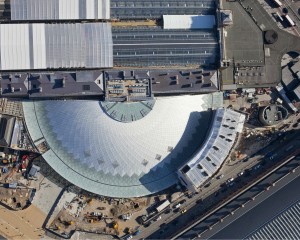 Luton to King’s Cross Station Taxi – Luton to King’s Cross Station Taxi Service – King’s Cross area is one of the most newly redeveloped places in London. It includes the most famous station in Britain, mostly known as the King’s Cross St Pancras Station. Its reputation comes from its central location and the amazing interior and exterior architecture, turning the station into a real London landmark. Also, it is within walking distance from Euston Station, another transport hub. King’s Cross station was opened in 1868 and now is one of the busiest in London. It was designed by William Henry Barlow, England’s railway engineer and it is said that at those times 6000 men worked day and night for 4 years using 100 steam canes and 1000 horses to build the magnificent construction.

It was firstly considered a “gateway to the north”, because its terminals were making the connection to the lines in the north of the city. Now, King’s Cross can be considered a “gateway to Europe” as the high-speed Eurostar train links London to mainland Europe (Paris, Brussels) and continental Europe. Just a few meters west of King’s Cross Station, we can find the St. Pancras International Station. Even though the two stations are operationally separate, they share the King’s Cross St. Pancras tube station and some important routes that secure the interchange between the stations.

Both King’s Cross and St. Pancras can be considered London landmarks due to their beautiful architecture and history. The area was previously known as Battle Bridge. Since a statue of King George IV was built by the famous architect Lewis Cubitt in 1836, the surrounding area that includes the two stations changed its name to King’s Cross. However, the adjacent station had to be named differently, to avoid misunderstandings. The name St. Pancras was chosen after a 14 years old Christian orphan that was martyred in Rome. His relics were brought in London in the 7th century and still reside in St. Pancras church in Canterbury.

In order to get rail transport from London Luton Airport to King’s Cross Station you need to take the train from the Luton Airport Parkway Station directly St. Pancras station. The train comes approximately every 20 minutes and the journey takes about half an hour. Alternatively, if you want to take the bus from the airport, you will have to make a stop at Marylebone, Baker Street Underground and then to Kings’s Cross Station.

London Luton Airport is 34 miles away from King’s Cross Station. If you want to travel by car, you have to take the M1 road until Brent Cross, then the A41 Road and A5205, which will take you to Euston Road. You will then come across Euston Square and Euston station. King’s Cross is just one minute away from there.

247 Airport Transfer can always provide you with a minicab from London Luton Airport to  King’s Cross Station. The price for a saloon car is £62 and the journey can take up to one hour and 10 minutes, if we include any traffic delays that may occur during rush hours.

London Luton Taxi service is a class apart when it comes to promising a secure ride. We don’t merely provide a car ride. Instead, our services promise an experience you will come back for. From modern, checked, and sanitized vehicles to varied customer capacity, we go out of the way to ensure your comfort. With rapid modernization, traveling has become a necessary chore, especially boarding a plane. Hence, our taxis from Luton to St Pancras station are the perfect choice for a safe joyride. Moreover, traveling with kids can be a very hectic ordeal. However, at London Luton Taxi service, we care for your angels as our own. We offer extra child seats and provide a child-friendly environment for your kid to relax during the ride.

Our taxis from Luton to St Pancras station take pride in providing an exclusive escapade with pocket-friendly prices, costing up to 50% less than others in the business. We are a local name with positive reviews from our valued customers and a proud recipient of multifarious awards presented by the LPHCA. Moreover, accreditation’s from Investors in people has made us one of the best taxi service companies in the UK. Apart from valuing our customers, we also take a keen interest in saving our environment and being an advocate for our environment. Hence, we also hold accreditation’s like ISO 9001 and ISO 14001 adhering to the British guidelines for the preservation of the environment.

We have a team of professionals who are dedicated to working around the clock to corroborate that you reach your destination safe and sound. Our taxis from Luton to St Pancras station consist of drivers and operators who are specially trained from Gram training and have an NVQ Certificate, Level 2 in Road Passenger Vehicle Driving and Transport Operation along with a certificate of exceptional customer training.

Along with a strong foothold in the industry, we also have 10 years of experience in the London transfer and private hire business. Moreover, our operators are available at your service 24/7 to assist and confirm your bookings immediately so that you won’t have to wait a single second more! Our services go way beyond providing car rides. We offer a package of exclusivity and comfort. From free wifi, music to luggage assistance at the airport, we are the one thing that your travel missed all along. We offer lucrative prices wrapped in a luxurious experience that makes us unique and the best choice compared to black cabs.

What are you waiting for? Need a ride? Book our taxis from Luton to St Pancras station today and avail a 10% discount for life!